It’s 8:19am on Father’s Day 2012. I have been up since 6am trying to keep myself occupied. Today is also the day of my Mother-in-Law’s funeral. God, even watching those words appear on the screen, I still can’t believe it. It all seems so unreal (sureal?). I honestly never thought this would happen. Then again, I think I always knew this would happen. She’d been suffering for so long. The cancer appeared over three years ago, and even then we knew it would get her eventually. It’s never easy when a loved one dies. This I know. It’s even worse when it’s a parent or spouse. I can only imagine what my husband, his brothers and their father are experiencing. I don’t want to go into how much she meant to me, or how special she was or how lost I’ll be without her. If you know me personally, you know what she meant to me and how I feel about her loss.

This is what I want to share with you today… I am currently staying with my Father-in-Law, attempting to help everyone else who loves him deal with the death of the love of his life. I am also trying to be “the rock” my husband needs so that he can begin to cope with the loss of his mother. It’s not easy, I am learning…

Yesterday, I found this in the bedroom in which I am sleeping. 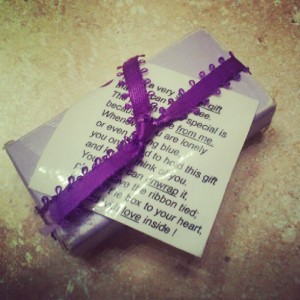 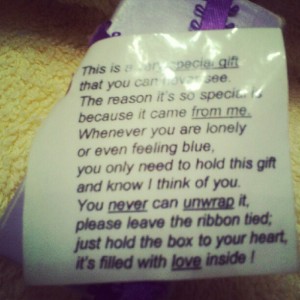 I like to think that this is a sign from my Mother in Law to hold on. To be strong. I know I have to be because if I lose it, so will everyone else. I have to stay strong for my husband, my children, my father in law.

Thanks Ma. I got your message. I’ll take care of them, I promise.

We’ve been married HOW LONG??

So… this month my husband and I will celebrate 12 years of marriage. I can’t believe we’ve been married this long already. 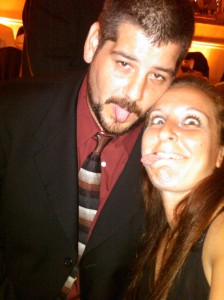 In the book Gone Girl by Gillian Flynn, Amy and Nick are celebrating five years. Every year for their anniversary, Amy presents Nick with a scavenger hunt, leaving little clues around town ultimately leading him to his gift, usually in whatever material represents that year.

Keeping that in mind, I thought I’d send my own husband some hints as to what he can get me for our anniversary next week…

The 12th  Anniversary symbols are as follows:

So lets start with the Traditional… 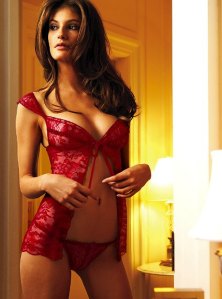 I’m not boasting to have this body…  Believe me, I am FAR from it…  but usually just the idea of… well, you know, gets him going.  🙂  And it comes with silk panties.

Maybe I can cover it up with this… 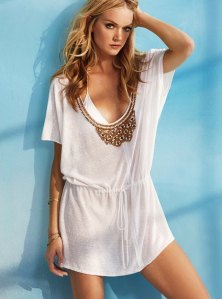 You know…  when the kids come barging in… 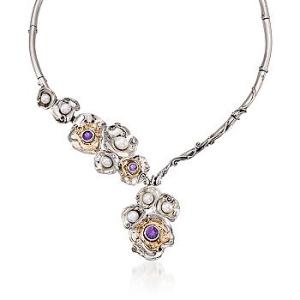 It has both colored gemstones AND pearls.  At least he won’t have to choose…

I don’t know much about flowers… but these are pretty 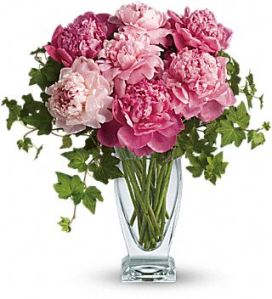 I have included links to all the products in case some kind soul takes pity on me and wants to buy me something (cause you know he doesn’t read my blog).

And my anniversary is the 23rd, in case you wanted to know when to ship it by…

This is an original ROSCMM post and was written for the From Left to Write Book Club and was insipired by Gone Girl by Gillian Flynn, a copy of which I received for free from the publisher for the purposes of this book club and no, you can not steal my content unless you specifically ask me for it first. It’s called copyright, yo.

Categories: From Left to Write Book Club, Sometimes I amaze even myself. | 6 Comments

Posted on June 3, 2012 by mastermindmommy

My son is grounded…  That’s right, he’s lost his iPod and he’s grounded. Grounding in this house is pretty lenient though so I don’t know how much he’s learning from this grounding, but at least I can say he’s GROUNDED. (Yay, Mom!)

My point here is not that he’s grounded, it’s what he’s doing WHILE he’s grounded.  Grounding (in this instance at least) means no video games.  The first day it was no TV, no video games, and look for that iPod.  The next day when we realized the iPod was truly lost and there was nothing we could do, I lightened his grounding to no video games. Indefinitely. (gasp!)

So, in between movies and TV shows and TV shows on demand, my son is forming a new “game” of sorts.  A few months back he began playing with a group of kids and they called themselves “The Group”.  They would do things like make “parts” where they learn skills and earn experience points (kind of like Dungeons and Dragons). They create avatars that have special powers and weapons.  So I guess this is just like a real-life video game.

Since the grounding, my son has been focusing more and more on “The Group”. (I know, it’s so original RIGHT??)  He’s created a journal of sorts, where he stores his ideas and rules about “The Group”.  As of late, he’s been making up spells using real (made-up) words and pretending he’s actually playing as his avatar in my living room, testing out his “spells” on his sister, the dog, the clouds, the shed. As I type this, he’s practicing his Martial Arts moves (he hasn’t taken Martial Arts since he was four). 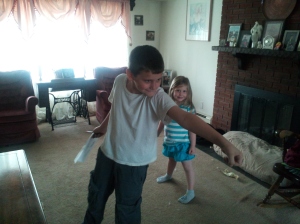 I should point out that over the last few weeks we’ve been reading together Ready Player One by Ernest Cline. 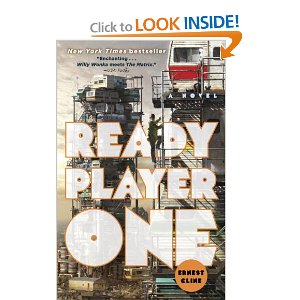 It’s a story set in the future when the earth is going to waste and the only way to escape the pressures of reality is to spend your time in the OASIS, a virtual reality universe where you can do everything from going on adventures and falling in love to opening a business and making your millions.  Most everyone is on the OASIS, only logging off to do the mundane things like go to work, shower and use the bathroom.  Wade Watts is the main character in this space opera.  Wade is just your average everyday teenager who lives his life in the OASIS almost 24/7.  When James Haliday, the creator of the OASIS, dies, he leaves his fortune to the one who can crack his puzzle. Wade learns all he can of the eccentric Haliday and his obsession with the 80’s, the decade in which he was a teenager.  Haliday’s “easter egg hunt” is filled with references to 80’s  movies, music, and video games.  The book, in a word is AWESOME, and my son is loving it too.

I’ve noticed since we’ve been reading it that he’s picking up things and using them in his “group work”. His journal can be compared to Wade’s “Grail Diary” (The Last Crusade was my FAVORITE Indiana Jones movie, in case you were wondering).  And his avatar is similar to Wade’s as well. (ok, maybe not…) 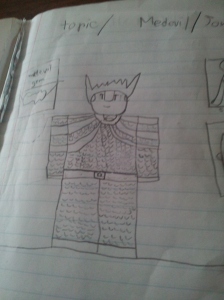 I love that he’s using his imagination instead of relying on something electronic to entertain him. I love that his sister is joining him on his “quests” (most recently to Connecticut by ferry) and they’re not beating the crap out of each other like they normally do. I love that he talks endlessly about his group work and about his body armor and weapons and the quests he’s been on and the things he’s built, all using his imagination, albeit they are based on that stupid Minecraft game that he’s ridiculously addicted to, but all his stories over the last week are from his OWN BRAIN and not computer generated.

***Ok kids…  this is the part where we talk about how you can win your very own copy of Ready Player One.***

This book is BRIMMING with references to the 1980’s, a decade which I, myself am quite fond of.  Do you love the 80’s?  Tell me your favorite movie, song, or video game for a chance to win!!  “Like” me on Facebook or follow me on Twitter for more entries!  Be sure to leave a comment when you “like” or follow so you get your entries!  Drawing will take place on Monday June 11th so be sure to get your entries in!

This is an original ROSCMM post and was written for the From Left to Write Book Club and was insipired by Ready Player One by Ernest Cline.  As a participant in this From Left to Write book blog tour, I received a copy of the book for review. Check out the other stops on the blog tour for a chance to win a copy of Ready Player One, and no, you can not steal my content unless you specifically ask me for it first. It’s called copyright, yo.

Oh, and if anyone finds my son’s iPod, would you please let me know so I can put it away and not worry anymore… It’s GOT to be here somewhere…

**UPDATE!!  I have just learned that Ernest Cline is running a contest similar to Haliday’s Easter Egg Hunt in which he his giving away a 1981 DELORIAN!!  Now you MUST enter my giveways and get your own copy so you can participate in the hunt too!!  Details about the hunt here: http://www.ernestcline.com/rp1contest/

SECOND UPDATE!! After 24 days of torture…  24 days of trying to find something else to do with himself… THE IPOD HAS BEEN FOUND!! Little Miss found it in his room.  Apparently he’d put it in his slipper so that she wouldn’t find it and forgot all about it.  Sigh…

#proudmoma Book Club Book Reviews Chewey Contests/Giveaways Drama FAIL Family From Left to Write Book Club Holidays i do love them even though they drive me insane I hate people. I swear they are trying to kill me... Kids Mama Kat's Writing Workshop my kids are FREAKING HILARIOUS NYC Mom's Blog Parenting FAIL Randomness... Rants Reviews Sometimes I amaze even myself. SV Mom's Group Things my husband does to me... this shit can only happen to me! Uncategorized Weightloss Write on Edge Writing Prompts

Ramblings of a Semi-Conscious Mastermind Mommy

Promote Your Page Too